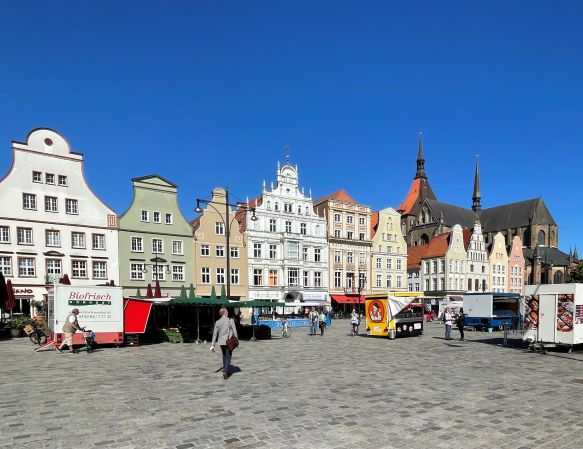 Rostock is a German city of 200,000 inhabitants at the Baltic Sea, one of the few cases of former East German cities that are thriving today. Inpolis Urbanism was called upon to assist the city council in its ambitious plan to support the local cultural and creative economy.

The term cultural and creative economy (CCE) refers to all sectors whose activities produce cultural and creative value (e.g. architecture, publishing houses, art market, audiovisual production) and is considered among the most dynamic economic activities in Europe today. In Germany, its contribution to GDP is second only to the automotive industry. Both at a central European level (mainly through the Creative Europe programme) and in many countries there are policies to support the CCE, as it has some special characteristics that differentiate it from many other sectors: mainly the very high rate of self-employment that revolves around 50% , as well as the particularly large number of micro-enterprises. Some years ago, our consultancy prepared the strategic plan for the CCE in the states of Berlin and Brandenburg, as well as for the city of Potsdam. In Berlin again, with European funds, we set up and coordinated for years a network around the clothing and fashion economy, which at one point reached the number of 150 freelancers and small businesses.

In Rostock, several CCE companies have settled in old warehouses near the port and have organized themselves into their own network. As they will soon have to move from there, the city council has asked the municipal administration to find the right space, but also the right tools to support the network in the future. What space do these businesses need, beyond their own offices? Do they need shared spaces for meeting and exchanging ideas? Where is space available and what are the characteristics of the alternatives? Does the municipality have to build something new or are there buildings available (e.g. old industrial estates)? How much will it cost to utilize an existing building? How much to build a new one? How can we calculate a rent that businesses can pay but that will be acceptable to the owner – private or municipal? What institutional form will the new scheme take? Will it be cooperative perhaps? What will be the implementation schedule? How can the municipality support all this and what budget will it need? Are there state or European funds that can be used?

Such an undertaking is only dealt with in cooperation with the industry itself and with the municipality’s services. Urban planners here initially have to play the role of coordinator of this process. Through a series of workshops, we will try to identify these needs together and map them in the city, analysing and evaluating the available spaces. The priority at the moment is to find council property, although this may change in the future.

Rostock is not the only case of a city with a CCE support policy, but the municipality’s handling of the issue is exemplary. Although we are talking about an industry based on self-employment and small businesses, the municipality recognizes its importance for the city, both economically and culturally. Also characteristic of this particular municipality, with which I have worked repeatedly in the past, is the admission that it needs external support in this project, as well as its trust in participatory processes.

We hope that by the end of 2022 we will have both an adequate space and a comprehensive plan to support the cultural and creative economy in Rostock.